Maintaining good oral health is the foundation of good general health. Infected teeth and tooth loss can cause a wide range of serious health impacts on many different aspects of health.

Now a new study has highlighted the link between tooth loss and one of the most frightening risks of growing old: dementia, including Alzheimer’s disease. 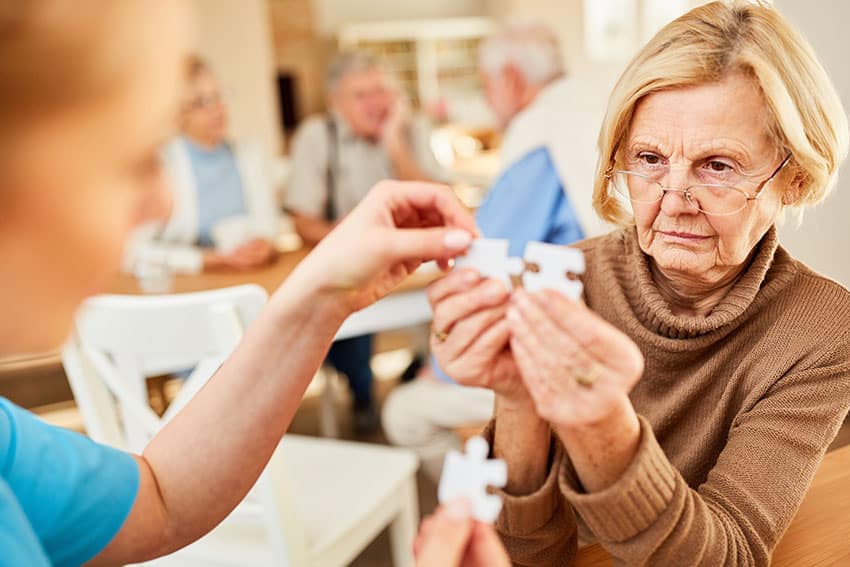 A 2017 Study Showed That The Fewer the Teeth, the Greater the Risk

For this study, published in the Journal of the American Geriatrics Society, researchers in Japan observed over 1500 people aged 60 and over who initially had no dementia. They were given dental exams and were observed for five years, during which time researchers tracked the development of dementia among the population.

During this five-year period, 180 individuals (15%) developed dementia. Most of the cases (127) were Alzheimer’s disease, while the remainder were categorized as vascular dementia. The symptoms of vascular dementia may be similar to Alzheimer’s disease, but the onset is often more sudden. It is more likely in people who have elevated stroke risk, and it shares some similarities with a stroke.

For the purposes of data analysis, the population was divided into four groups on the basis of their number of remaining teeth: 20 or more teeth, 10-19 teeth, 1-9 teeth, or no teeth remaining. Looking at the data, researchers found that people with 20 or more teeth had the lowest risk of dementia, while the other groups had elevated dementia risk:

Researchers also found that the risk of Alzheimer’s disease was inversely related to the number of teeth a person had remaining.

What Do You Gums Say About Your Dementia Risk?

A more recent study was recently published by the American Academy of Neurology found that those with moderate to severe gum disease and/or tooth loss were more likely to develop thinking problems or dementia.

The study involved 8,275 people average age of 63 who had no dementia at the beginning of the study.

They evaluated patients at the beginning of the study for oral health problems and found that:

To conclude, the study found that those with oral health problems or missing teeth had a greater risk of developing dementia. The results are not conclusive and require more studies. However, this doesn’t mean patients can’t start protecting themselves from an increased risk of dementia now by taking good care of their oral health.

How Teeth Benefit the Brain

Although the association shown in this study is important, just as important is understanding how our number of teeth might be linked to the health of our brain. That is a harder question to answer, but there are some strong theories.

A newer theory explicitly links teeth with brain function. In this theory, supported by a recent study, the presence of teeth and active chewing directly stimulates the brain via the trigeminal nerve. As a result, people who maintain their teeth–or replace their teeth with dental implants–experience more brain stimulation, helping the brain to stay more active despite its age.

Keep Up With Regular Dental Visits in Rochester, MI

No matter which theory is true (or both or neither), the effect is the same: keeping your teeth can help your brain stay sharp as you get older. If you want to maintain your teeth for a lifetime, it’s important to see your dentist regularly.

If you notice any signs of gum disease like receding, bleeding, or swollen gums, you might need gum disease treatment. The sooner you get treatment, the less likely you will lose your missing teeth. If you do happen to have missing teeth, dental implants are the best replacement option and may help reduce your risk of dementia since they act like natural teeth.

If you are looking for a dentist in Rochester, MI to help maintain your teeth and your overall health, please call (248) 656-2020 today for an appointment at Rochester Advanced Dentistry.