Can Yoga Rejuvenate Your Face?

If you are unhappy with the symptoms of facial aging, such as jowls, crepey skin, and deep facial folds, your ears probably perk up anytime someone mentions a way to rejuvenate your facial appearance without an invasive and risky procedure like facelift surgery.

The idea is especially appealing if it’s something you already do or think you might want to do, like yoga, which is tremendously popular these days. But can yoga really rejuvenate your facial appearance? It’s highly unlikely, but on the other hand, it’s not likely to hurt, either.

However, it’s important to understand that the benefits of inversion are partly based on a misunderstanding of how facial aging works. When you understand all the factors that go into facial aging, you’ll see why a nonsurgical facelift might be the best way for you to restore your appearance. 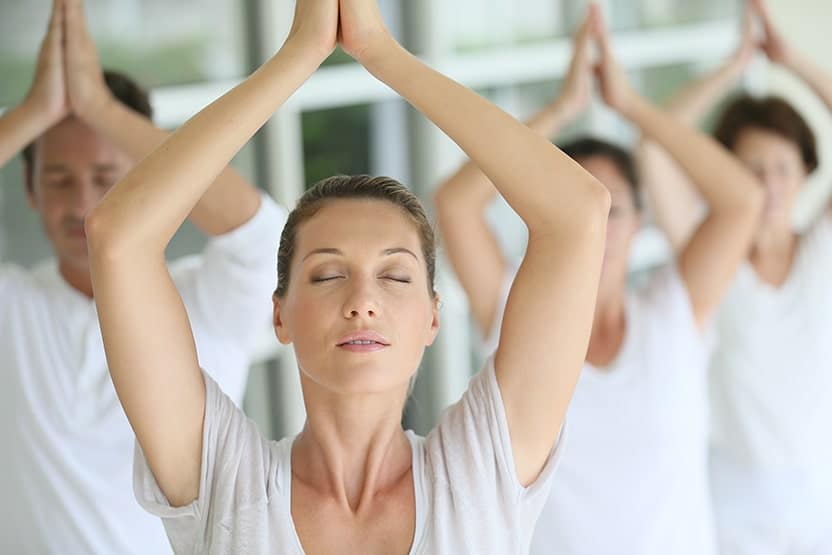 Supposed Benefits of Yoga for the Face

When claiming that yoga can improve the appearance of your face, proponents usually talk about three different sources of benefit:

Basically, some people propose that it’s the inversions in yoga that can help with facial rejuvenation. Positions like child’s pose or downward facing dog are praised because they can change the way gravity pulls on your face, inverting it and reducing the stress on skin, tendons, and other tissues. This, or full inversion either hanging upside down or using an inversion table, supposedly keep facial tissues elevated in the face, not sagging down to create age markers like jowls, turkey neck, and folds around the mouth.

In addition, these postures improve blood circulation to the face. Supposedly, this should help the skin maintain its youthful appearance because it has more access to nutrients in the blood supply.

These claims are all well and good, and they even make sense, but do they actually rejuvenate the face? It’s hard to say.

Probably the most likely claim relates to stress relief. We know that stress can be aging–studies show that being stressed can make you look older. Not only that, it can make your brain older as well as cause effects on  your DNA similar to aging. So, reducing your stress, whether with yoga or other strategies, can probably reduce the impact of aging on your face.

While it is true that hanging upside-down can force more blood into the head, including the face and skin, this doesn’t address the underlying issue that causes reduced circulation, namely changes in the blood vessels that reduce the body’s ability to manage blood flow in the face. It’s possible that this could lead to improved skin tone, it might have unwanted side effects. If you force blood into the face that the body can’t easily remove because of vascular problems, you might increase the incidence of spider veins. That may not be a tradeoff that’s worth it.

Skin Might Not Be Saggings as Much as You Think

But what about sagging skin? Despite celebrity endorsements, here’s no evidence that inversion helps with this, and, besides, it’s not as big a problem as it’s made out to be.

Plastic surgeons constantly emphasize the fact that your skin is sagging because this is what they treat with a facelift: they pull up the skin and stretch it tight. However, if sagging skin were really the problem, you wouldn’t see so many cases where a facelift really changes a person’s appearance. Instead, pulling up and stretching the skin changes the appearance because the underlying support structure has changed. Some stretching happens, but some of the change occurs because the jaw is moving up at the same time due to the wear and loss of teeth, as well as changes in the bone. This is described as the “concertina effect.”

Our nonsurgical facelift procedure addresses this cause: we restore your teeth to a height that puts your jaw back  in its youthful position. This not only helps you look younger, it helps you look like you.

Learn Whether a Nonsurgical Facelift Is Right for You

Facial aging is an incredibly complex phenomenon, and it’s important to consider different options before committing to something like a facelift–or even yoga–under the belief that it will rejuvenate your appearance. Instead, it’s good to consult with many professionals to learn which procedure might best address your facial aging.

To learn more about the benefits of a nonsurgical facelift in the Detroit area, please call (248) 656-2020 today for an appointment with a cosmetic dentist at Doolin Haddad Advanced Dentistry in Rochester, MI.